Coronavirus: robots and drones soon at the heart of the French crisis? 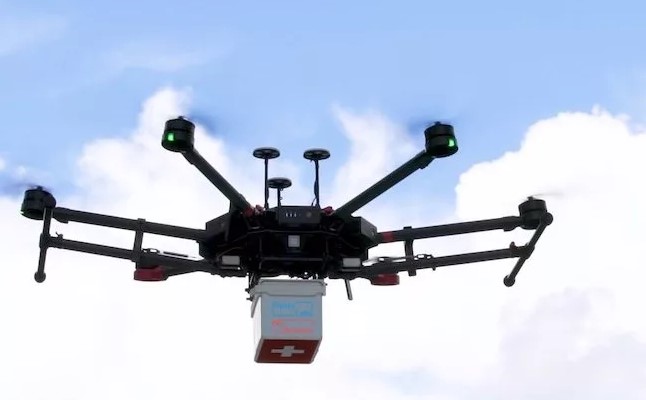 In response to the call from Cédric O , Secretary of State for Digital, on March 10, 2020, the company SoftBank Robotics Europe proposed the deployment of its humanoid robots to help and relieve medical personnel or the entry of Ministries or Town Halls facing the coronavirus epidemic.

It is not the first time that futuristic objects can help effectively. During the Notre-Dame fire on April 15, 2019, the world watched helplessly as images were captured by a drone flying over the building, equipped with a thermal camera. Then, in a quasi-surreal way, we saw a Colossus caterpillar robot – with a water cannon – enter the cathedral… Operated by the Paris Fire Brigade, robots and drones participated in their own way in this incredible fight against the flames.

In Nepal, during the 2016 earthquake, drones made it possible to quickly map the affected regions, piloted by Patrick Meier’s “WeRobotics” humanitarian network. They were even able to capture and document in photogrammetry the buildings on the verge of collapse, or the entire village of Panga, thanks to the Swiss Pix4D software .

In 2020, in Wuhan, drones and robots took on a decisive role, almost from a science fiction film. While China Mobile urgently installed 5G antennas and hospitals were being built in two weeks, the ballet of robotic devices also began in a city confined by the spread of the coronavirus. In the air, the huge DJI hexacopters, usually used for fertilizers used in agriculture, this time released anti-bacteriological products.

Smaller models with thermal imaging cameras began to inspect the apartments in the city’s towers: floor after floor, families go to the balconies or in front of the windows to measure the temperature! In the street, e-commerce platforms have deployed autonomous delivery minibuses, no doubt crossing small tracked tanks intended for them to spray disinfectants. In hotels and hospitals, delivery robots deliver dishes and medicines. An emotional Pepper robot is deployed at the reception of Wuhan Wuchang, one of the largest hospitals in the city.

Closer to home, in Italy, drones transported several tests to the Covid-19 in the airspace of the city of Naples to Monaldi Hospital .

Who could have foreseen this? In reality, as early as January 2020, my friend Gary Shapiro, the boss of CES Las Vegas, had added to the theme of this edition a topic on resilient technologies in response to emergency situations – he was thinking in particular of earthquakes – and climatic changes. This fine nose, this enthusiast of innovations, reminded us to what point new technologies can and must serve the common good.

Recent developments in robotics and AI – such as known examples of radiology or the French startup Cardiologs which analyzes the data collected during electrocardiograms – aim to support doctors, nurses and hospital staff through the automation of repetitive tasks and patient care assistance.

The Pepper robots, with a size of 1 meter 20, are already in use in hospitals like Necker in Paris or St-Marien in Cologne. They take care of welcoming visitors or distracting children. Our robots can carry out various information functions and conduct rich interactions with humans .

Thus, their role could become crucial in cases of epidemics where the medical staff are overworked, tired. With their exchanges in natural language, in several languages, human detection and autonomous navigation, it is possible for social robots to help positively to eliminate time-consuming or stressful moments, as an assistant to medical personnel. And even after the crisis, it will be necessary to relieve the staff and allow them more recovery periods, hence the idea of ​​entrusting certain repetitive tasks to humanoids operating almost 24 hours a day.

Let us also mention the surgical robots: what was still science fiction – the robot 2-1B from the film “The Empire Strikes Back” – is now almost within our reach. As demonstrated by the Da Vinci, an American system that allows the surgeon to operate with a three-dimensional vision and a macroscopic view. With its control of human gestures, it allows, each year, to improve the chances of success of more than 6 million operations and to reduce possible complications, and therefore fewer hospitalizations.

Nothing is easy in the context of a pandemic: how to set up, operate, maintain, update, clean, repair a fleet of robots in a context where it is necessary to avoid any risk of contamination? How to train new people remotely in robotics? How to make sure that the robots themselves are cleaned or repaired – and yes, we always need humans for that! It is a challenge for all technology companies: we are not health experts but we can play a role with MedTech partners.

Faced with such a threat, modern remedies for AI and robotics will be additional assets in this crisis and the ones to come.

More from GadgetsMore posts in Gadgets »