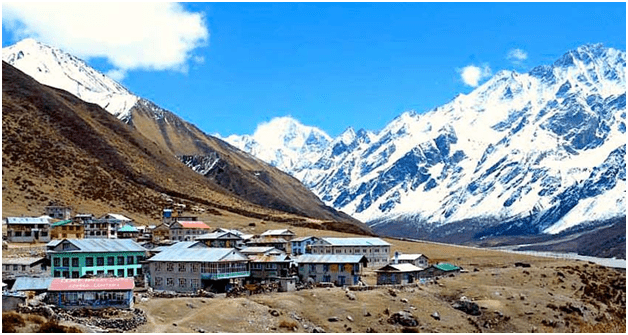 Exploring the beautiful Langtang valley was a fantastic experience. It is said that Langtang valley trek is the most popular and less crowded trekking route of Nepal. Those six days tour were a stunning experience. On the hike, I’ve met the excellent guides and porters and the magnificent mountains with culture miscellaneous and a whole wide range of flora and fauna. The view from Kyanjin gompa and Tserko Ri was a fantastic experience. Witnessing the waterfalls, wild animals, and numerous suspension bridges along the way are the best adventure to go on. It was easy to trek in Langtang valley.

After arriving in Nepal, one of the representatives picked me up from the TIA Kathmandu airport and then I was transferred to Hotel. After having the rest, I’ve started exploring Thamel, which is the central tourist hub of Nepal. Then I enjoyed some delicious Nepali cuisine at the Hotel and then spent my night. Then after that, I enjoyed the second day by sightseeing at Kathmandu, and the UNESCO listed places.

After exploring Kathmandu, my journey straightly took me towards the Syabru Besi. It was a 50 miles ride and a long ride towards Syabru Besi. Syabru Besi the gateway of famous Langtang Trek and other treks of Langtang region. Travelling on a public bus in Nepal was an incredible thing to be done. Seeing the beauty of the Tamang Heritage Trail was fantastic.

It was a remarkable journey walking through the famous valleys, farmlands and glaciers. Kyanjin Gompa was the most beautiful place. The biggest challenge which we chose was to climb up to the Kyanjin Ri viewpoint. The view from Kyanjin Gompa was breath-taking. We enjoyed there for a long time enjoying the beautiful views of the surroundings. Due to the high level of snow reaching Kyanjin, Gompa was harder.

This six-day trek was magical which offered endless beauty of nature and astonishing Himalayan views of Langtang Lirung, Langtang II, Ganesh Himal and many other snow-capped mountains. Tserko Ri was also a fantastic viewpoint from where the beauty of many snow-capped peaks was seen.

From Syabeu Besi commonly Tibetan Influenced villages were started to be seen and all the locals were also of Tibetan Influenced. The name Langtang also influences Tibetan. From Syabru Besi the trail passed through the many unspoiled routes which offer a spectacular surrounding. Situated near Tserko many sherpas, and the ancient monastery of Kyanjin Gompa made the track beautiful.

The landscape of the Langtang region

As the Langtang valley started from Syabru Besi, the landscape of the district was astounding. By a couple of voyagers, the trek brought more courage to all the trekkers. After reaching the viewpoints Kyanjin gompa and Tserko Ri the beauty of Langtang region can be seen. This region was a beautiful place with both natural and religious tenets. The Langtang region has a variety of Landscapes from the Gosaikunda to natural hot springs.

Enjoying the Sherpa and Nepali cuisine was one of the wondrous things to be experienced throughout the journey. From the starting day, I’ve been enjoying the

Nepali cuisine. The delicious Nepali cuisine includes lentil and spices soup- Daal served over boiled grain- Bhat usually rice and sometimes another grain, and then the darker is performed which is the vegetable curry and finally the condiments which are generally less in amounts of a spicy pickle- which can be fermented and fresh.

Throughout the journey, I’ve seen mostly pristine forests after reaching Syabru Besi, the entry of Langtang region and Langtang National Park. The maximum area was filled with the Pristine forests. As our team went to the high elevation, the meadows of wild sheep, Tibetan-like culture and lovely mountain views started to appear. In the Langtang region, it is said that the name “Langtang” comes from the ancient Buddhist lama who followed his lost yak into the valley on which “Lang” means “yak” and “Tang” means “follow”.

I’ve trekked with one of the incredible porters and guides who made our team professional from the time we’ve met each other. We met at the Syabru Besi from where our team was formed, and my journey was started. They were supportive and informative along the journey. Throughout the whole trek, we had a perfect time without any problems. There are only sherpa guides while trekking in Nepal. I’ve seen only sherpas or only Mongolian guides or porters throughout the whole journey.

Langtang Valley Trek was an incredible journey with fantastic life experiences. This journey has been an unforgettable journey which provides an experience, unlike any other place. Those six days Langtang Valley Trek was the best option I have chosen as an adventure traveller. This week-long trek on the mighty land of the Himalayas taught me many things. Langtang trek is less popular, so I haven’t seen any crowd throughout the journey.