List of Top 5 Best T20 Cricket Leagues in the World 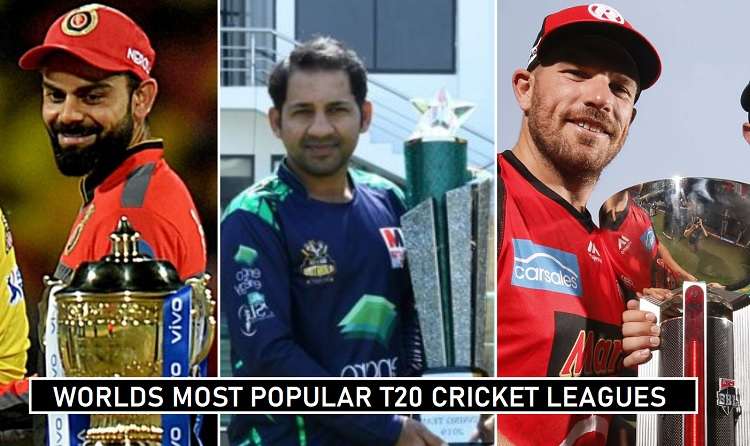 In Asia and Africa, cricket is one of the widely liked sports game. Almost all cricketing nations have their own T20 cricket leagues and players from all around the world participate in it. T20 cricket is liked even in those countries that don’t have their own cricket team. But they love to watch this short version of the one day cricket.

There are so many T20 cricket leagues in the world, even in India; celebrities from the entertainment industry have their own T20 cricket league. They call it Celebrity Cricket League (CCL) and it is very famous in India as it has teams from various regional film industries.

Bangladesh started their very own T20 league BPL in the year 2012 and it has produced some good players for the Bangladesh cricket team like Mustafizur Rehman. According to Urdu Geo News, Warner and AB de Villiers signed a contract for Bangladesh Premier League recently, which makes it even more interesting.

Most of the overseas players in BPL are from Pakistan and West Indies. The league has some issues about the payments to players that make the league somehow not good for players of Australia, England, and New Zealand.

Another great league sponsored by Hero MotoCorp and league is officially called Hero CPL. The league calls itself to be “the biggest party in sport” but we are not sure why they claim so as it is not true.

But the good thing is that the Caribbean Premier League is fun to watch because of the amazing Caribbean crowd. The quality of cricket is good as the players entertain the spectators. Pitches are a bit slow, which is not good for T20 cricket.

But if we look at the overall fun, the league is good enough to list on the 4th place. They also try to involve Americans in cricket; so they host a few matches every season in the US as well.

The very own T20 cricket league of Pakistan is Pakistan Super League that was announced in 2015 by Pakistan Cricket Board. Though Pakistan is one of the biggest cricketing nations that produced a lot of quality cricketers, due to terrorism in the country from 2007 to 2014, PCB couldn’t start it earlier.

Due to this factor, the entire 1st season of the Pakistan Super League was played in UAE and the second season as well except the final match that was hosted at Gaddafi Stadium Lahore.

PSL 2020 was the first season of the Pakistan Super League that was entirely hosted in Pakistan. With these problems, the league performed very well and produced a lot of good cricketers like Shadab Khan, Hassan Ali, Haider Ali, and many more.

Here you can check various options for PSL live streaming PTV sports. You will get the updated links during the tournament especially, a half-hour before the start of every PSL match.

Big Bash League (BBL) is the official league of Cricket Australia. The next edition of the league will be starting from 10th December 2020 which will be very exciting.

The league was started in 2011 and this will be the 10th edition of BBL. The best thing about this T20 cricket league is that they don’t rely much on overseas players. They have plenty of local cricketers who provide an amazing and exciting game.

The overall environment of the tournament is very good and the attendance is also good. But this season will be no in-person attendance due to the Covid-19 pandemic.

Check any ranking of worldwide T20 cricket leagues, you will find the Indian Premier League at the top. Moreover, you will not see any Indian player in any other T20 league of the world because BCCI doesn’t allow its players to play the T20 league other than IPL.

It was ICL, the first cricket league in India by the name Indian Cricket League, but it was not an official league by the BCCI so on the request of BCCI all the cricket boards asked their players not to participate in the ICL. After the first edition of ICL, BCCI started its own Twenty20 cricket league IPL in 2007.

It is played every year in the month of March, April, and May with 8 different franchises. The matches are played in 8 different states of India hosted by either of the two playing teams.

The Indian Premier League had some match-fixing problems as well on a big level. It is the only cricket league in the world where the entire team was banned due to the match-fixing case. In 2015, Chennai Super Kings and Rajasthan Royals were the two franchises banned for two years.

With that, Raj Kundra and Gurunath Meiyappan were banned for a lifetime for any cricketing activity.

Published in Entertainment and Sports