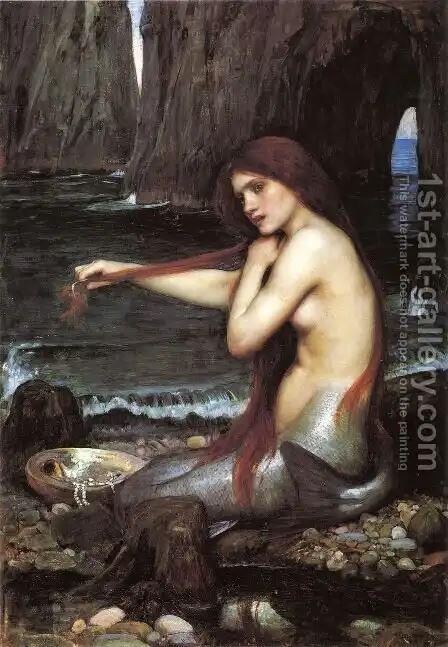 The world under the sea surface is full of mysteries. From the majestic Atlantic City to ancient mythological creatures like mermaids, the folktales and stories from the aquatic world never fail to surprise us.

With a world so vast and imaginative, how can we not expect an artist to get inspired by the creatures and stories coming from under the ocean? Just like that, mermaids have been made into the imagination of some great painters.

Their representation of the beautiful yet ferocious mermaids is unique, distinctive, and different from an average Joe, and that is what we will try to decipher here today. First, let’s find out about some of the best mermaid paintings by famous artists.

John William Waterhouse is regarded as an outstanding and celebrated Pre-Raphaelite artist. He came to join the movement in its second generation but made a massive impact with his thoughtful painting style.

This mermaid artwork by John William Waterhouse is inspired by Lord Tennyson’s poem that came out in 1830 named “The Mermaid.” After his selection as an Academician, the painter went to the Royal Academy of Art with this painting.

Interestingly, both his parents were also painters, and they got him into the Academy from where he learned his art and evolved.

The painting became famous in the Royal Academy for portraying the mermaid with her ‘wistful-sad look.’ However, the painting is also linked to human emotions and longings that are never satisfied.

American illustrator Howard Pyle created this masterpiece in 1910, and the painting gained popularity due to its unique presentation. The spectators with a knowledgeable background in arts often say that looking at The Mermaid is like looking through a window.

The creation of moonlight casting of a hue on the character’s face (both the mermaid and the sailor) is splendid. The coral, seaweed, and light on the pearls stuck to the mermaid’s hair may be small, but they do not fail to grasp your attention.

The painting shows the relationship between a mermaid and a sailor, unique for love and affection. As mermaids are seduce-kill sailors, this painting shows otherwise and highlights the love between land and the sea.

This painting is inspired by an episode from the poem Odyssey, written by Homer. The voices of the Sirens are tormenting Ulysses, and the poet depicts their ordeal in the poem in his words.

The painter took inspiration from a particular episode in the poem. The sailors are tied to the mast at a time when drawn to the seductive aura of the Sirens. According to the Greek school of thought, Sirens are ugly creatures from ancient times, but they are depicted as beautiful and naked mermaids here.

Herbert James Draper is a Pre-Raphaelite painter, and the depiction of the Victorian and Edwardian artworks is visible in his paintings, including this one.

This painting has been inspired by the famous story, The Little Mermaid, by Hans Christian Anderson. The author shares how a mermaid falls in love with a prince whose ship got wrecked in the sea. The mermaid tries to change her tails into legs to become a human.

You can even see the mermaid’s scaled fish tails from the sea surface and can tell each of them apart. However, the facial expressions are bland and dull because, according to the story, the sister will eventually give their hair to a witch who has agreed to convert the little mermaid into a human.

This painting came out from a Russian painter who was also a part of the Democratic Art Movement in the country running between 1860 and 1880. The painting represents old Slavic mythology whereby 19 Rusalki or river/lake spirits visit the shore.

The painting that you see comes from the story “A May Night,” also called The Drowned Maidens. The painter of this masterpiece, Ivan Kramskoi, was a patron of the realist painting style, but with this painting, he portrayed a romantic fantasy narrative with a touch of a fairy tale.

There is minimal color in this painting, and in the entire frame, the women will catch your eye as they are placed in the center mid-ground. One thing to notice here is the inconsistency of the shadow.

You can also see some women dispersed on the bank’s edges and look lost in their thoughts.

Almost every sailor has at least one story where they see a mermaid in the roaring sea or have to run and save their neck from one. At the same time, there are stories of the eternal love between a man and a mermaid. Different times have brought us other stories.

Mermaids have become a part of our culture, and today, they have got an even more critical byline. Just as everyone is going crazy over having a mermaid in their surroundings, you can get a beautiful painting made and hang it in the house.

Paintings made by the artists at 1st Art Gallery will recreate the exact version of any of the mermaid paintings you want to have. They look beautiful and will garnish your space with their serenity and calmness.