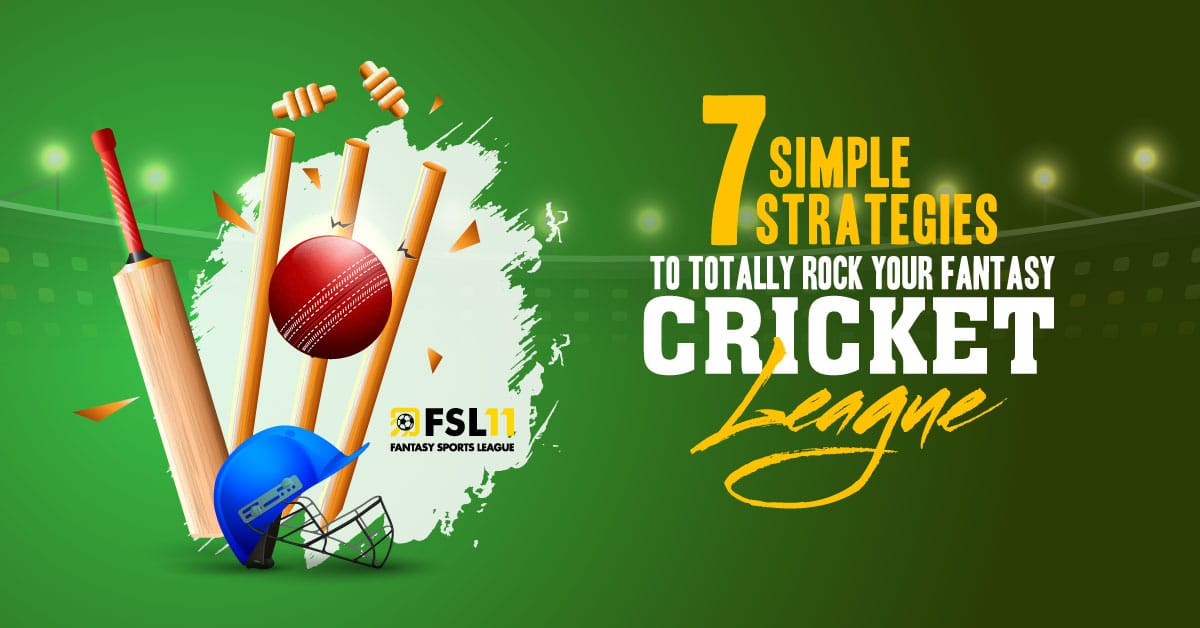 Cricket is more than just a sport in India, it is a religion for some and emotion for others. Nothing can match the adrenaline rush that the end of the match brings. Well, for all the Cricket fans worldwide, fantasy cricket is a post-lunch dessert that fills your soul.

As a nation of cricket fanatics,fantasy cricket gives you an opportunity to put your cricket knowledge into use by not just playing the game and winning a good amount. But how do you do that? Here’s a list of seven simple strategies to totally rock your Fantasy Cricket League:

Do not pick players on the basis of their performance months back. Instead, invest in the performer of the recent or current game. Recent performances and form matter more than a player’s career record, since your earnings will depend on the performance in a one-off match. On the contrary, if you are selecting a league for a team, then opt for players with high records as they are likely to perform better in the long run. You can also check a player’s performance by clicking on their image in FSL11 – fantasy cricket App.

Simultaneously, it is important to keep an update on a player’s current status like change in position or any injuries in previous games and kind. This guides towards their upcoming performances.

Tossing has a larger impact on the choice of players and the game. However, you only have a small window to make any last-minute changes according to the form selection. As soon as the final toss is released by the teams, you can make the necessary changes, in the player and the team.

Most fantasy cricket players do not pay attention to weather and the pitch report. Here’s a clever trick – If it is a slow and dry pitch and an afternoon game, you should pick more spinners in your team rather than a swing bowler. Similarly, if it is a pitch like the one in Wankhede, power hitters and swing bowlers should find a place in your team.

The key to winning big is by choosing the top order batsmen in your team, especially in T20s. 60% of players in your fantasy cricket league should be ideally top-order batsmen. Since they get to face the maximum number of deliveries, it is only natural to expect them to score big runs.

One of the most important Fantasy Cricket App tips is to choose the right captain and vice-captain. The decision of the same might make the difference between winning and losing the game or the league. If you manage to select the two best performers of the game as your captain and vice-captain, it will be very difficult for anyone to beat you from that position. Since the captain of each team gets 2x points and the vice-captain gets 1.5x points.

Creating multiple teams increases the probability of winning more. Even if you lose one contest, you may end up winning big in another contest with a different team. You can create upto 6 teams per match and choose to join a contest with any of the teams created.

You need to pick at least one player from all the categories. The ideal way to go about it is by picking all-rounders who bat in the top four so that you get maximum points. The same goes for wicketkeepers, who are known for their batting abilities too and can fetch points through both batting and wicket keeping. It is always better to go for a combination player.

More from SportsMore posts in Sports »