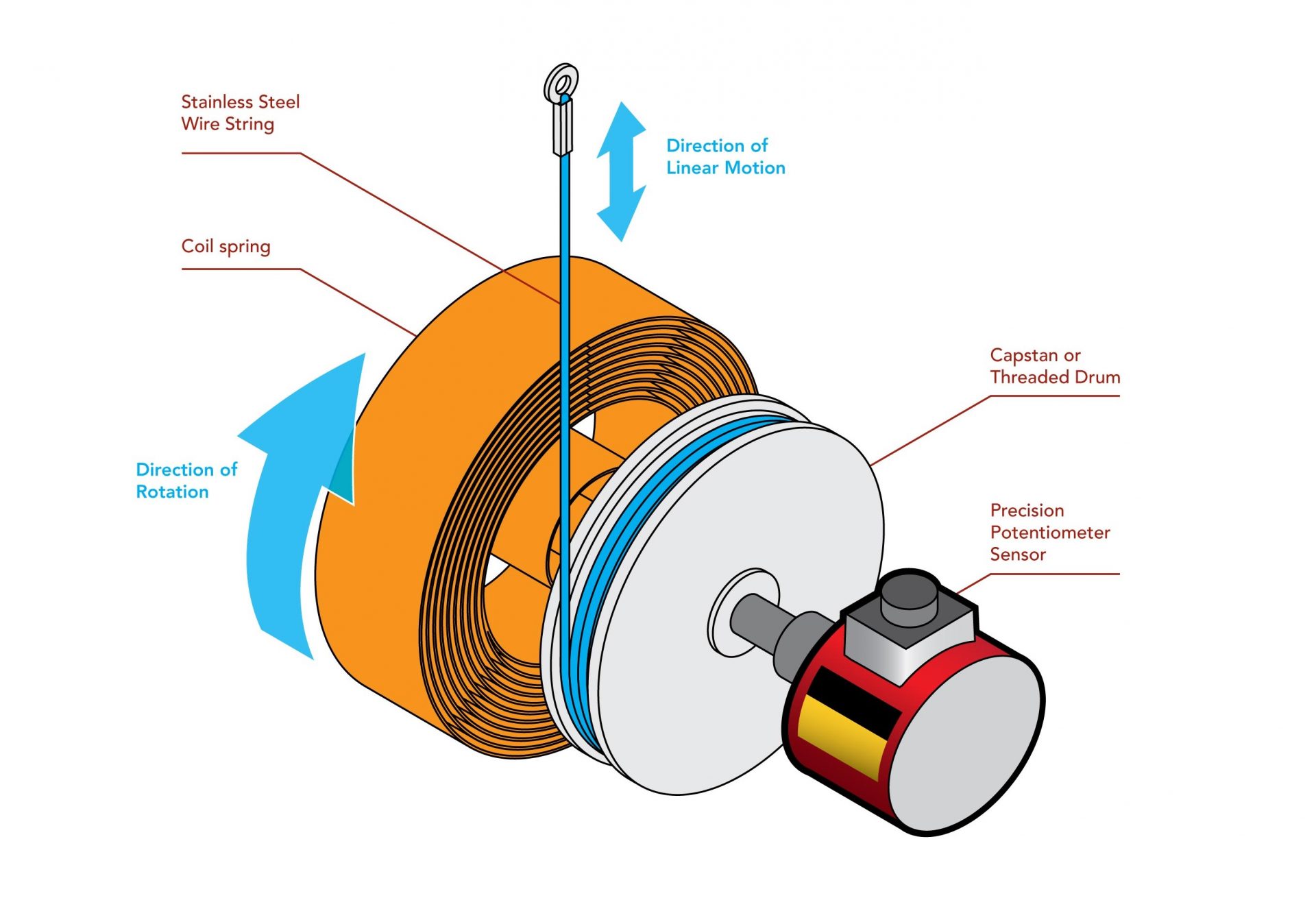 A string potentiometer is a transducer, also known as a string pot, a draw wire sensor, a string encoder, or a yoyo pot, is an acable-actuated position sensor that uses a flexible cable and a spring-loaded spool to detect and measure linear position and velocity. It is composed of four main parts;

The transducer’s body is fastened to a fixed surface and the stainless steel cable is attached to the moving object in order to take measurements. A torsion spring is attached to the spool to maintain cable tension. A rotational sensor’s shaft is connected to the spool. The spool and sensor shafts rotate as the transducer’s cable stretches along with the mobile object. The transducer generates an electrical signal proportionate to the cable’s linear extension or velocity as the object travels. After that, the signal can be routed to a display, a PLC, or a data-gathering system.

String pots are quite adaptable and can be used for a variety of purposes. Because they offer a superior stroke to length ratio than a linear transducer, they are frequently chosen for applications where space is limited.

They also provide greater space flexibility than LVDT Linear Displacement Transducers. String Pots are typically more cost-effective than other linear position measurement technologies due to the transducer’s ease of operation.

Forklifts, cranes, and aerials, material handling, die casting, oil and gas, robotics, and automation are just a few of the industries that use hydraulic cylinders. A string potentiometer is commonly employed to measure the cylinder’s extension because it requires knowledge of its current position.

A moving item is measured using string potentiometers. To get a direct measurement of the location of interest, the measuring cable can be linked directly to the moving part. Engineers and designers have been using this simple form of a measurement instrument for over 40 years. Common applications include:

String pots make measuring the movement and position of things simple. String potentiometers may be placed in minutes, and they don’t require absolutely parallel alignment. They can also be fitted into dangerous or tight spaces. They are also more versatile, have a smaller size-to-measurement ratio, and are less expensive than rod or wand-type measurement instruments. String pots can be used in a wide variety of applications including industrial factory automation, high-tech medical devices, structural and automotive testing, die-casting or injection molding, hydraulic cylinder control or just about anything else you can think of.

String potentiometers are often long-lasting, simple to operate, and low-cost. A wide range of cable operated string pots, and draw wire type sensors are available to cover a wide range of applications for lengths greater than 50 meters. Each datasheet includes a variety of alternatives for structural testing, automotive testing, civil/structural testing.

They offer the following outputs;

Get cable-actuated string pots with applications in automation, commercial vehicles, medical, and test and measurement that are simple to install from strainsense. They also provide open frame designs for OEM needs such as boom arms, elevators, and outriggers.