The 10 Most Expensive TVs in the World 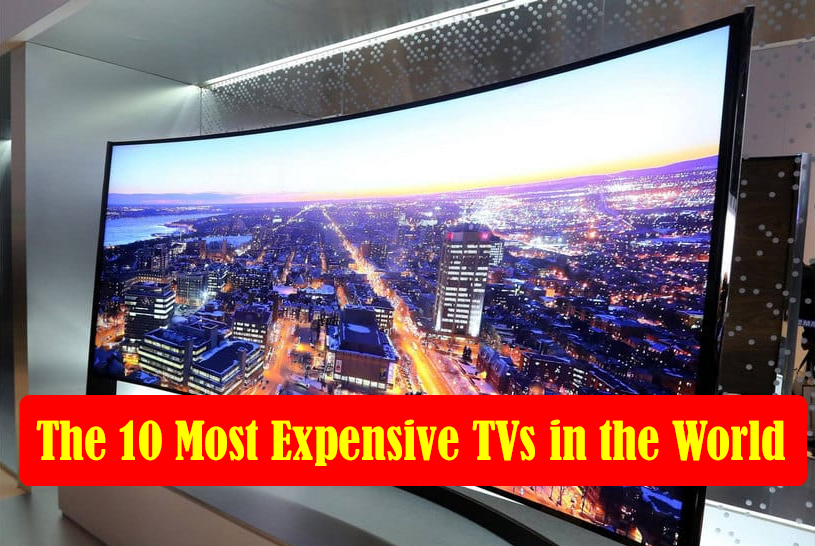 Television is no longer just a mass medium for disseminating information. It is a major source of entertainment, education, news, politics, gossip, and advertisement. It’s everything you want and everything you don’t want. If you ask me, it’s mostly what you don’t want. However, you can bet that the majority of people can’t picture life without a television. Even those who are unable to purchase a large number of items. Yes, it is quite addictive.

When most individuals are asked about the goods that aren’t missing from their houses, the television is usually one of them. It’s one of those products that are likely to be found in every home. And there’s usually not just one, but multiple televisions.

Although the television was conceived in the early 1920s, the first mass-produced television sets were introduced in the years following WWII’s end. Since then, technology has advanced dramatically, and television has experienced numerous advancements. Starting with tubes, from monochrome to color, and progressing to digital with LED, LCD, plasma, HD, or 4K, they have it all.

Believe it or not, there are some people for whom more is never enough, and viewing their favorite show on a cheap television is no longer entertaining. They must have something special, and it must be quite costly. And it’s getting bigger. If feasible, with gold plating and diamonds. And it’s a possibility.

With a screen size of 103 inches, the Beovision 4-103 is one of the world’s largest available flat-screen TVs. It has an elegant and minimalist design and a cool price tag of $140,000. It also comes with a cutting-edge and one-of-a-kind motorized stand that will wow you with its show-stopping powers.

Bang & Olufsen, a Danish business, also created harmony between the TV’s picture and sound by matching it with two of their fantastic speakers, resulting in not just a great product, but an incredible audio-video experience.

Because of its great picture quality and large dimensions, the BeoVision 4-103 is best suited for home theatre viewing. This TV, on the other hand, includes a number of picture-improving features, such as automated picture control and an anti-reflection coated contrast screen, which improves the watching experience throughout the day.

This list would be incomplete if Samsung wasn’t included, as it is one of the most powerful corporations in the industry. But, believe it or not, with a price tag of $150,000, this model is the cheapest Samsung on our list. Regardless, it’s a 4K UHD TV with a 3840x2160px resolution and a 240 Hz refresh rate on its massive 110-inch screen.

With its many features, including an excessive number of USB and HDMI ports, this huge TV is likely to dazzle its new owners while simultaneously emptying their wallets due to its exorbitant price.

Another Samsung UHD TV made it onto our list, and it’s only $2,000! In fact, it costs $2,000 more than the preceding TV, which is its sister. You might wonder what the difference is between the two, given their enormous size and amazing features. What can you get with an extra two grand? Motion Control, oh well.

That means you can operate the television with just your hands. Don’t you think it’s rather impressive? And it’s not cheap.

The Sharp LB-1085 was introduced in 2008 and was designed to be extremely durable. It was built to withstand the rigors of commercial environments and be used 24 hours a day. As a result, it sports a 108-inch LCD screen with Full HD quality and low-reflection technology to give a good image in almost any lighting scenario.

What’s more, thanks to its 176-degree viewing angle, images may be clearly seen from practically any angle. Despite the fact that this TV is relatively ancient, it nevertheless has a price tag of $160,000.

With a startling price tag of $260,000, this is the most expensive Samsung TV ever, and it will make you turn away. It will, however, dazzle you with its brilliant color, wide field of view, panoramic impact, and impressive range of features. It has features such as UHD upscaling, auto depth enhancer, UHD dimming, and Precision Local Black Local Dimming, to name a few. That translates to a crystal clear image, natural colors, and maximum picture performance in plain English.

But its bendability is the most striking attribute. Yes, by pressing a button, the screen may be changed from curved to flat. This, combined with its 105-inch screen, makes it the world’s largest bendable TV to date. The only drawback is that it may require you to be a multimillionaire to afford it.

The TV made its debut at IFA in Berlin, but we have yet to hear from Samsung about when this behemoth will be available. Last year, they sold a 105-inch curved variant without the flexible screen for $260,000, so expect a similarly astronomical price tag for this one.

Panasonic’s half-million-dollar TV, with its massive 152-inch screen, provides a hypnotic experience with astonishing features that rival any cinema. It boasts a 4K 3D Plasma Display with smooth, brilliant colors throughout the full screen and rich texture reproduction thanks to newly developed technology, so you can watch your favorite movies in their original colors.

The three new Full HD 3D large-format plasmas are designed for use in a wide range of cutting-edge applications, including corporate environments (e.g., for 3D CAD proposals, where life-sized 3D simulations could improve design accuracy and flexibility); commercial applications (e.g., car showrooms or real estate offices for virtual-reality customer demos); and healthcare (where the ult

However, keep an eye on the stats. A half-million-dollar investment and a half-ton of material. Both your living room and your wallet will be weighed down.

This baby, which isn’t really a baby when you consider its weight (almost one and a half tons), has a High-Resolution Retina LED SMD 201 inch display and is specifically built for individuals who wish to have an outdoor theatre in their own backyard.

The Porsche Design Studio built a spectacular underground storage station that rises like a monolith and unfolds into seven huge LED panels at the touch of a button, converting into one of the world’s largest outdoor LED TVs. If that wasn’t enough to pique your interest, consider the 780,000 LEDs, 12 broadband speakers, and three subwoofers. Or the $680,000 required to purchase it.

The third television on our list is designed by Stuart Hughes, a well-known British designer. With a 55-inch display, it isn’t as large as its competitors, and it lacks the bells and whistles of the more spectacular TVs on the market. It’s exclusively made of 18k gold and is encrusted with diamonds, jewels, and alligator skin.

It would look great in any living room, but I’m interested as to what else one could watch. The diamonds on the screen or the shows on the screen? Or, because the buying price is a whopping $1.5 million, the invoice after the transaction.

The Titan Zeus is now the world’s largest television, with a name to remember and a size that makes an elephant look little in comparison. It features a 370-inch screen, and you may need to expand your home or backyard because you’ll need to be 50 feet away to really appreciate the image.

The TV has some unique features, such as motion tracking, touch-sensitive technologies, and even a dynamic CGI aquarium that transforms the TV into a massive fish tank. What more could you ask for? The $1.6 million needed to purchase it.

The first item on our list is yet another Stuart Hughes ultra-luxury item. It’s essentially the 55-inch TV from number three, but with a lot more gold, 28 kg of 18k rose gold to be exact, additional valuable stones, including Sunstone and Amethyst, and, of course, alligator skin.

It is currently the most expensive television in the world, costing $2.26 million.