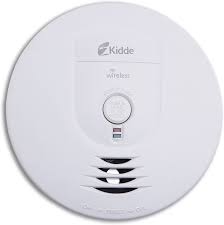 Did you know that more than 70% of the fires that occur in our country are in housing blocks? A very high percentage that causes about 2620 deaths a year according to various studies carried out by insurers and NFPA. These reports conclude that these victims could have been prevented by putting in place a fire prevention system, such as the autonomous smoke detector.

The smoke sensors, which also are very easy to install, low cost, and require little maintenance, are very useful for detecting dangerous situations. And not only inside homes but also in the workplace.

The wireless smoke detector is a fast and reliable protection measure that we should rely on and install within our community support and maintenance services, and which, by the way, is mandatory in many countries.

What is a Wifi Smoke Detector?

A device made of PVC with a white metal front and an LED ring in its central part that changes color depending on different warnings. Its works by connecting electricity and backup batteries. It connects to the Wi-Fi network and communicates with an application that is downloaded to the mobile phone.

It is used to alert for the risk of smoke or carbon monoxide, so it warns by voice and sends notifications to the mobile application. The device is placed on the ceiling, the application is downloaded to the smartphone and the configuration is carried out to receive information on incidents in real-time.

Operation and Benefits of the Self-contained Smoke Detector

Wireless smoke detectors are very effective electronic devices when it comes to preventing possible fires. They are small, lightweight and, although it can be located on the wall, it is usual to place them on the ceiling. It has an internal alarm, which in the event of smoke, emits a loud sound immediately. Some models also emit a light signal from an LED bulb.

In this way, in the event of a fire, you can minimize the accident or save human lives. These are the most prominent advantages of the autonomous smoke detector:

Types of Fire Detectors and Installation in Homes or Communities

Currently, you can find on the market a wide variety of types of smoke and fire prevention sensors, increasingly sophisticated. In fact, most already have removable batteries and a minimum duration of 10 years to avoid manipulating and altering them.

There are also kits interconnected to each other that go into an alarm state at the same time, even if they are placed in different or distant rooms. And there are even some devices that also include a temperature sensor.

Smoke detectors with this technology can not only detect smoke but are also sensitive to heat. When used in kitchen and smoking rooms are less likely to set off a false positive.